Our editors pick the products & services we write about. When you buy through our links, we may get a commission. Learn more.

On-board diagnostics systems have been around for a while, which is why today I have written this article about Autel Maxidiag MD806 pro vs MD808 pro. They are hand devices that can help you control engine functions and diagnose problems. Thus, they enable you to know about car problems before they lead to dangerous situations or fat service bills.

But if you’re an auto mechanic or a DIY enthusiast like me, you can do much more with OBD systems and save much time in diagnosing your car problems.

Without a doubt, there are some amazing OBD2 scan tool products in the market today. I personally have had the chance to try a lot of them. But, there are only a handful of manufacturers that truly understand what an auto mechanic or a car owner requires from an OBD system.

Autel is one such manufacturer that I want to discuss today. Specifically, I want to compare and discuss two of its best products that I have come across, Autel MaxiDiag MD806 pro vs MD808 pro. So, without wasting any more time, let’s dive right in. 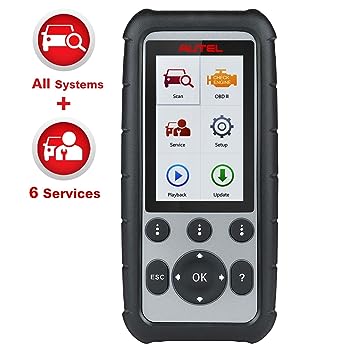 I was particularly fascinated by AutelMaxiDiag MD806 pro for its powerful functions and the price tag at which it is available. Since MD806 pro was released in 2019, it comes as no surprise that it performs an all-system diagnosis and provides all OBD2 functions.

As soon as you pick up Maxidiag MD806 pro, the first thing I realized was how lightweight it was. I have had many OBD2 scanners that are a burden to carry around, but this one is nothing like it. Besides, the unit has a carrying case as well that makes things even easier when it comes to storage and transportation.

There are a whole lot of things that one can do with MD806 pro. From reading and erasing codes to freeze frame data and graph to storing and playing back live data – all these things are built into the MD806 pro. Another thing that I really liked was that MD806 pro displays the definition of codes because, let’s face it, no one can ever fully remember what each code is for.

There are various other services that are going to make your life easier. These include resetting oil light, steering angle sensor, battery maintenance and electronic parking brake service. Though it may appear overkill at first, when the problem arises you’ll be thankful that MD806 pro can take care of all these things.

All the aforementioned functions aside, if you know OBD2s, you would be wondering what major systems it can scan. Fortunately, this Autel scan tool covers all major systems – engine, ABS, transmission, SRS, BMS, DPF, you name it.

As I plugged it in, I realized that it had automatically detected the vehicle make, model, and year, which is quite neat and saves time. People for whom English is not a first language can also change the settings to their native tongue. There are 13 most spoken languages to pick from that covers most of the population on earth. 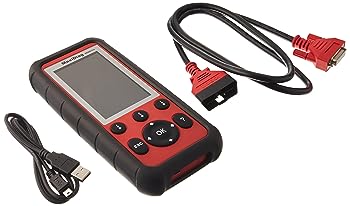 4 / 5
MD808 pro is quite lightweight and has a carrying case that makes it easier to travel around with. Auto mechanics would find it to be a great alternative to bulky OBD2 scanners.
Check Price at Amazon

Now, the only other OBD2 scanner that comes close to giving MD806 pro a run for its money is its close cousin Maxidiag MD808 pro. It too is a powerful all-system diagnostic tool with a trick or two up its sleeve.

The first thing that I noticed right off the bat is how Autel MaxiDiag MD808 pro felt in the hand. MD808 pro offers a firm grip, which I believe is due to its rubberized sleeve. It should ideally protect the device from accidental falls as well.

The plastic is in itself quite sturdy and I had a hard time putting a dent in it (believe me, I tried). Like its MD806 pro counterpart, MD808 pro is quite lightweight and has a carrying case that makes it easier to travel around with. Auto mechanics would find it to be a great alternative to bulky OBD2 scanners.

MD808 pro doesn’t hold back any punches when it comes to offering the best of what an OBD scanner can provide. Reading and erasing codes, freezing frame data, graph, view, and store and playback live data, reading transmission codes – everything ever needed is available. Yes, if you have a problem figuring out what each code is for, it also displays code definitions.

Functions aside, Autel maxidiag scanners are known for their all-system diagnoses. As such, you can expect it to scan engine, transmission, ABS, and SRS. While using MD808 pro, I realized that I had started to expect a lot from it, and it kept on delivering.

The user interface is neat and uncomplicated. I just intuitively knew where everything was and how it had to be accessed. The menu is available in English, Spanish and French only.

After using and experiencing both Autel Maxi Diag MD806 pro and MD808 pro, making a decision to pick one seems like the hardest task. No doubt, as a car owner I could blindly choose any one and would not regret it. But, there are minor differences that seem to give MD806 pro a definitive edge.

These include the weight, reprogramming TPMS, and the languages supported. If you are into auto repairing, these differences can seem pronounced and you may want to choose one that packs everything into a neat and lightweight scanner tool.

However, MD808 pro is also slightly cheaper. Ultimately, the decision is up to you. To me, both MD806 pro and MD 808 pro are like birds of a feather and either one of them would do.

I understand that there are certain questions that seem to pop up time and time again. I want to resolve them once and for all.

Yes, both MD806 pro and MD808 pro provide full lifetime software updates for free so the tool remains relevant even as new car models come into the market.

Autel MaxiDiag scanners can be updated on any operating device. This includes Windows, Android, and iOS devices.

No, both MD806 pro and MD808 pro depend on car battery to function and need to be connected by an OBD2 cable to the vehicle.